Geography and climate: a description of the abiotic factors 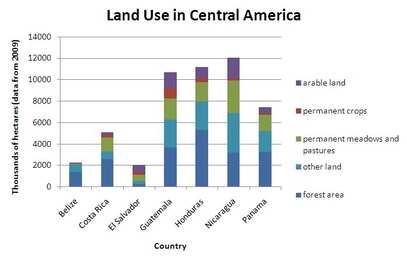 The Central American rainforest is located near the equator in the countries of Belize, Costa Rica, El Salvador, Guatemala, Honduras, Nicaragua, and Panama. The rainforest itself is tropical, rather than temperate, meaning the climate of the rainforest is wet and warm much of the year. Tropical rainforests are found between the latitudes of 25 degrees north and south of the equator. The temperature in these rainforests rarely dips below 20 degrees Celsius (68 degrees Fahrenheit), and ranges up to around 35 degrees Celsius (94 degrees Fahrenheit). Humidity is usually over 75%, and average rainfall is from 50-260 inches annually. The rainforest floor can range from flat plains to low elevation mountains.  The Central American rainforest's unique abiotic climate and geography allows this thriving ecosystem to be a diverse "jewel of the world" in biotic factors. (Michels, 2010) Graph is from World Watch Institute; no creator was listed.

The rainforest is home to over two thirds of all plant and animal species on Earth, with an unmeasurable number of species still undiscovered within it. the trees of the Central American rainforest, are the center of life and they produce niches for countless animals and account for 70% of all flora found there. Although tropical rainforests cover only 2% of the Earth's surface, they account for the greatest number of unique species in the world. About 25% of Western medicines are a product of the remarkable plant life of the forest and there are likely many more untapped resources. Only around 1% of the rainforest's plants have been tested for medical use, yet they contribute to a quarter of modern medicines. The Central and South American rainforests sport the highest animal density, and contain  animals that are as numerous as they are diverse. Each species in the rainforest is highly adapted to its particular habitat, which means there is no such thing as a harmless change in the rainforest. Thousands of Central American rainforest species are threatened or endangered. In fact, the rainforests have some of the highest rates of endangered species in the world. Some of the best known rainforest species, like  jaguars and poison dart frogs are endangered, with more and more species endangered each day.   ("Rainforests," 2009) (Michels, 2010)